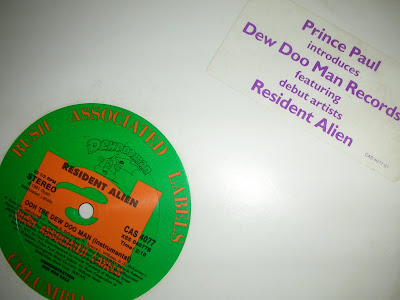 This promo came out in 1991 to launch Prince Paul's Rush Assciated Labels imprint, Dew Doo Man Records.  Definitely top-notch Paul admist the De La Is Dead era, and I think the "I've been expecting you" was re-used by KMD on Mr. Hood.  Or is it the other way around?  The Dew Doo Man logo is the classic smiling cartoon blob of shit with a cape on.  The MC (or MCs??) is Resident Alien, and I don't know too much about him/them, but apparently this isn't his/their only record.  Who could forget Mr. Boops? I love this beat.  Used to open our radio show, "The Monday Night Hype" on KSCU in Santa Clara circa 1992 with the instrumental every week.  Discogs got this for sale for like $34 or something.  It's a bueatiful 2 minutes and 10 seconds of dew doo.  I spun this at a cannabis club parking lot party where I got paid with a chemdog Medi-cone, and Brian Rich the rap-buyer from Streetlight Records in SJ, came up and checked the label and gave me the thumbs up.  Straight dap.
OOH THE DEW DOO MAN by Resident Alien
song
instrumental
a cappella
Posted by Smooth Triumph at 4:54 PM 1 comment: 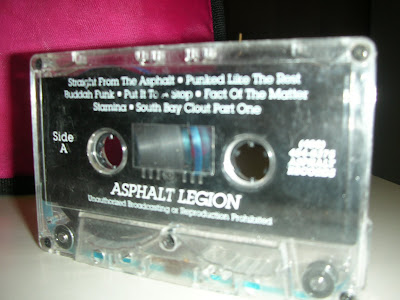 Santa Cruz in the HOUSE! In 1994, producer, emcee, b-boy and DJ, Coolie Bee (one half of Asphalt Poetry) took it upon himself to document the little known hip-hop scene in Santa Cruz, California. With the ambition of releasing a compilation featuring various crews who were representing Santa Cruz down to Monterey Bay, he produced and released the album on tape in 1995. There were only 300 copies of the tape made, and these were only sold locally. To support the full-length release, a 12” single was also pressed to promote the album and the artists. There were 100 copies of the 12” pressed, given out on a promotional basis (See what Kutmasta Kurt, also a Santa Cruz native, had to say about that). Recorded and engineered at the Glue Factory by Dan “The Automator” Nakamura, the compilation and 12” have sat largely unknown to people outside (and inside!) Santa Cruz and the Bay Area.

Nearly 16 years since the original Asphalt Legion tape was released in late 1994/early 1995, New Medina Music is proud to annouce the re-release in association with Imperial and Asphalt Records. Taken from the original DATs, the sound, style and rawness of the sessions have not lost their spirit in the 15 years since. A full-interview (over 10.00 words in entirety) was conducted with Imperial (formerly DJ Coolie B) documenting the Santa Cruz scene from the early 80s thru the mid 90s [YO OH!!! When can we get our hands on that???]. The EP's (Volumes One and Two) are 200-copy, limited pressings, not to be repressed. Test pressing have been approved, and shit's been shipping since June 1st, I think (shit, it might already be sold out, there were only 2 hunski). 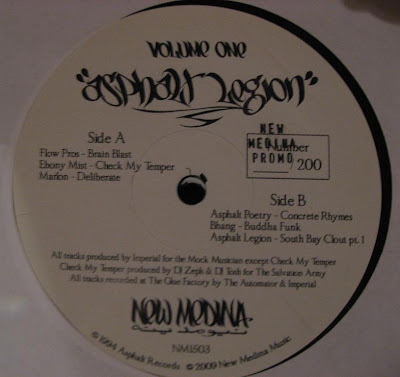 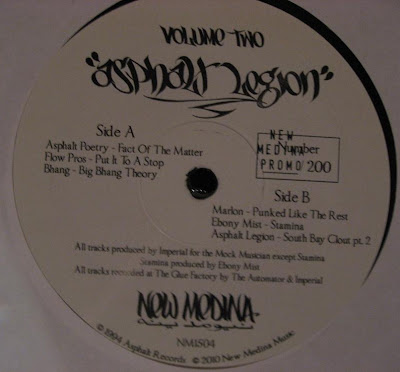 Special thanks to DJ Oh from New Medina for the content above and the promo below.

Here's my burn of both whole sides of the original tape that I got from the Mt. View Tower Records in like '96, and it's best described like the "baby's blanket" hash oil that's dripped on the bud before assembling this post: an intelligent lifeform in and of itself, rolling freely like mercury, losing and regaining form at will, exploring the dank terrain, until sparked to sparkle and sizzle, then inhaled as a conduit to uncharted levels. Master-eschelon hip hop skills presented by true connoisseurs of the dusted era. THIS is the art-form currently on the brink of extinction we so dearly cherish. "Punked Like The Rest" and "Stamina" are my go-to joints. Don't mind the hiss.

asphalt legion side a: straight from the asphalt, punked like the rest, buddah funk, put it to a stop, fact of the matter, stamina, south bay clout part one

Posted by Smooth Triumph at 7:41 AM 2 comments: 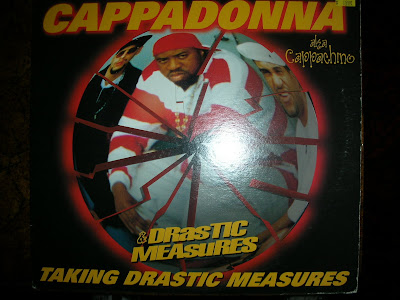 Cappadonna's the flyest stylist of the weird shit, breaking it down with other weirdos: Wizone and Lork LaRock over a J.Mob dirt beat. This is a weird 12", but the beat is just so dirtball! It came out in '96 and the only person thanked in the liner notes is Jesus Christ. Word Billy.
TAKING DRASTIC MEASURES (Cyphamix)
TAKING DRASTIC MEASURES (Cypha Instrumental)
Bonus: Here's also the original demo of "Sandwiches" by the Beatnuts where JuJu says, "I smoke roaches with basketball coaches..." Props to Vrse Murphy of Sacred Hoop for digging this out for me:
BEATNUTS-Sandwiches (Original Demo)
Posted by Smooth Triumph at 11:32 AM No comments: