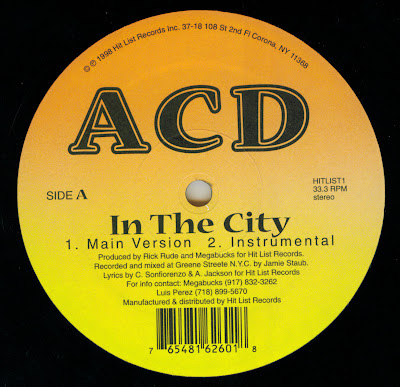 Prodigy's first 2 lines from "Street Life" left my brain scarred back in 1996. The Mobb Deep, L.E.S. and A.C.D. team up track from the AIDS benefit album "America is Dying Slowly" has always been one of my favorite Mobb collabos. L.E.S.'s production sounds like he was using the same William Cooper schematic Havoc referenced for "Hell on Earth". Another eerie, paranoia inducing street banger from The Bridge. But just who were A.C.D. and what did it stand for? I wouldn't come across anything else by them for quite a few years. 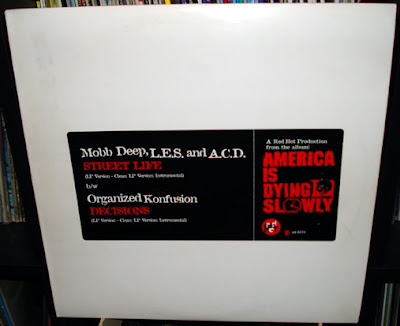 Fast forward to 2000something: While digging around on th'bay I discovered a sealed copy of an A.C.D. 12" from 1998. I won the record and when I finally got a chance to listen to it I was amazed I'd never heard the 2 tracks before. Vintage late 90's QB material that, while not as dark as "Street Life", contains enough grimy record scrape to send 41st side addicts scrambling out into the cold night, ceremoniously gutting dutches. A-Dog and C. Sonfiorenzo (What is his real MC name? Dude is so gully you can only lift his publishing credit!) bring that real QB house science. This was the first release on the short lived Hit List Records label out of Corona, NY. The only other Hit List release I could find is another A.C.D. single titled "Kings of New York" which features fellow QB resident, Nature (hit me if you got one to trade). 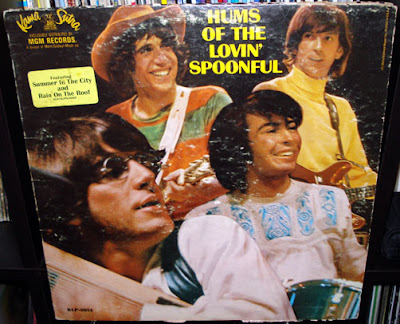 The Rick Rude and Megabucks co-produced A side, "In the City", lifts the breakdown from The Lovin' Spoonful's "Summer In The City", which you can find on "Hums of The Lovin' Spoonful" (Kama Sutra, 1966) as well as various 45 issues. This grim piano loop sets the tone for ACD's grim portrayal of inner city street life. 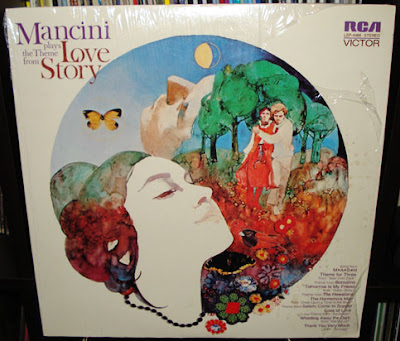 The B side is the A-Dog produced "Mos Niggaz" which is based on 2 bars from Henry Mancini's version of "Theme from 'Love Story'" (RCA Victor, 1970). If it sounds familiar to you, Immortal Technique recently used the same loop (although lifting 4 bars instead of 2) for his track "Dance With The Devil". A-Dog's use of only 2 bars creates a tense, snowballing effect that really keeps the track moving along and leaves IT's endeavor sounding a bit like he's rapping over his grandma's favorite soap opera theme. 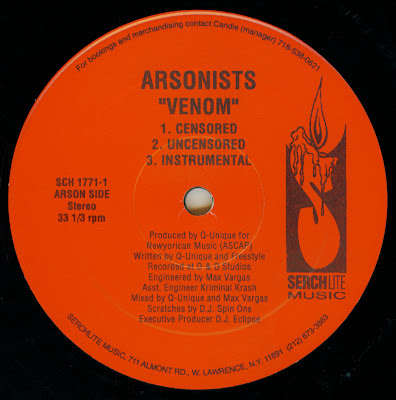 This eery as all hell Arsonists 12" isn't listed when you look them up on Wikipedia. This record was released under the host of the White Rapper Show's label (Serchlite) in 1998. These tracks are off the (A)rson side of the record; the (B)urn side features the song, "Seed" (not uploaded here, 'cause we want y'all to dig! lol) The recording and mix engineer on "Venom" is listed as the assistant engineer on such classic hip hop records like Gangstarr's "You Know My Steez," Jeru's first two albums "The Sun Rises in the East," "Wrath of the Math," and Smif-n-Wesson's "Dah Shinin'." His name is Max Vargas. He's part of that Eddie Sancho, Norty Cotto, Luis Tineo (is he related to Ju Ju-aka Jerry Tineo from the Beatnuts? anybody know?), etc. D&D crew when David Carpenter was manager-- the guys who Premier relied on so heavily throughout the years. These guys perfected the science of creation for the grimey underground rap 12" anything they're involved with usually results in the listener back-slicing a Swisher with their thumbnail. Q-Unique produced this joint by liberally lifting the very end of the Cerrone superjammie, "Supernature" like a muhfuckin' g.

Cerrone is a trip in and of hisself. Wiki his ass and find out. Here's a snippet from it concerning this song, making this record kind of even more of a must have now:
The song "Supernature" has a sci-fi theme: it's about the rebellion of mutant creatures — created by scientists to end starvation among mankind — against the humans. It also featured "Sweet Drums", a three-minute-and-ten-second drum breakdown. The original French album cover was again different, having a gatefold opening with nudes in the centre.
But as of now I don't have it, so I have to rely on Seeqpod's search engine to show y'all what Q-Unique did. Go to the end of the drum breakdown and you'll get the gist.
Basically (and I mean that in the best way possible), he flips between the two loops of tinkling stuff that run consecutively right after the drums verb out. The simplicity of the programming/sequencing allows the dudes at D&D (Mr. Vargas in this case) a lot of room to perform their voodoo, which is evidenced in the embedded nuances that you don't notice at first like the subtle delay on the heartbeat-type kick in the intro. I don't know if that was Vargas' or Q-Unique's idea as the latter is given a co-mixing credit, but whoever it was is a sneaky fucking genius 'cause it's pure dope.
"Show fright and prey gets swallowed in one bite."

VENOM
Posted by Smooth Triumph at 8:58 AM 5 comments:

MENTAL ILLNESS GOT THAT BLEEK BLEEK 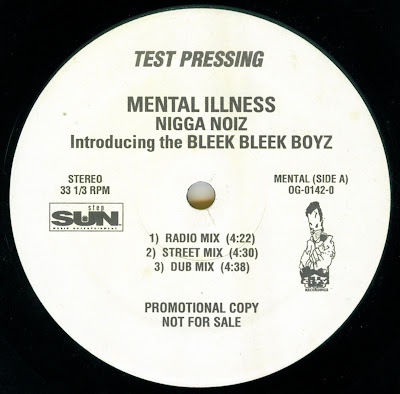 Another mysterious StepSun release. Unlike Death Camp, this looks to be a mass produced "test pressing". What a strange label: Troubleneck Brothers, Motion Man and Paul Mooney? Ill shit. I know next to nothing about this record. Post a comment if you have some insight. 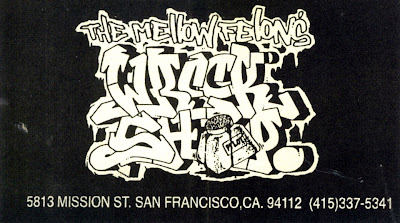 I found this going through some boxes in my garage looking for old radio show tapes. It's a business card from the early 90's for a little graff shop that was run out of a small window in the back of what would now be considered a hip hop shop (tapes, leather caps, beepers, incense, etc). Not gonna say who ran it, but real heads will be able to tell from the card. First time we rolled through I remember catching some tips, an ultra, a copy of Skills and the Battle Breaks record. The store was short lived and the location is currently a drapes shop.

I've blessed ya'll with a bunch of treats this past week. Positive or negative, comments are appreciated and encourage us to keep working on this shit. If you are digging what we do, let us know.
Posted by Eons One at 2:36 AM 5 comments: 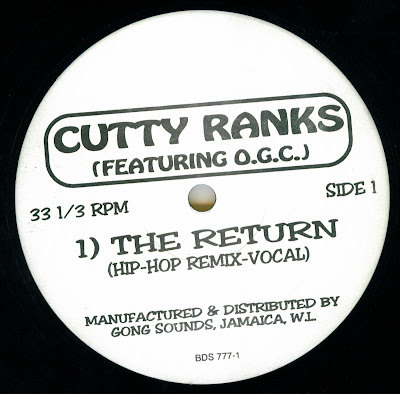 One of my all time favorite 12"'s to play out. The winning combo of old school beats with O.G.C. at the top of their game paired with the Cutty Ranks anthem. Perfection. I through something extra in the folder for all the Fab 5 fans in the house. 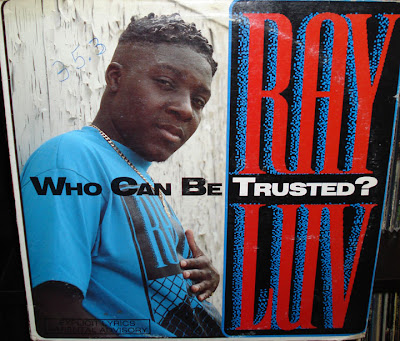 Ray Luv's debut 12" from 1992 on Strictly Business Records. Mine is in a "Who Can Be Trusted" sleeve which makes sense since the sleeves and tracklistings of both records are almost identical. Worth revisiting for the Alex Meija megamix style remix of "X Check It Out Ya'll" alone, but check that ridiculous drum roll in "Get Ma Money On". Khayree rock, rock on. Oh, and that's DJ Cee rippin' the cuts.

Here's a little story I gots to tell
Posted by Eons One at 4:23 AM 6 comments:

Rugged NY 12" from the late 90's. This is somewhat of a compilation of various D.O.O.M. Entertainment / Die Hard Records artists. Shout to Joe from Noisear for hipping me to this. "G-Notes" is Smooth Triumph's new anthem.

DOOMED
Posted by Eons One at 2:33 AM No comments: 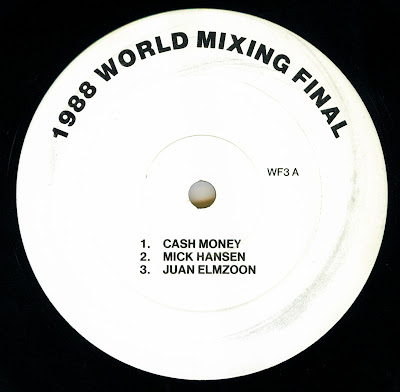 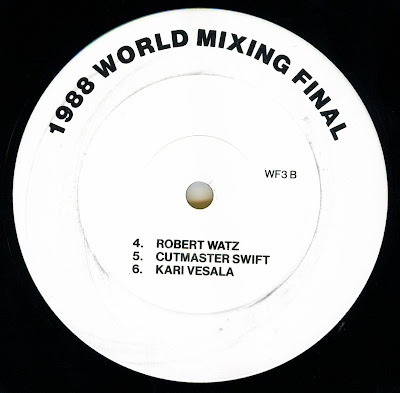 Ladies and gentlemen, DJ number one tonight...
Posted by Eons One at 2:02 AM No comments: 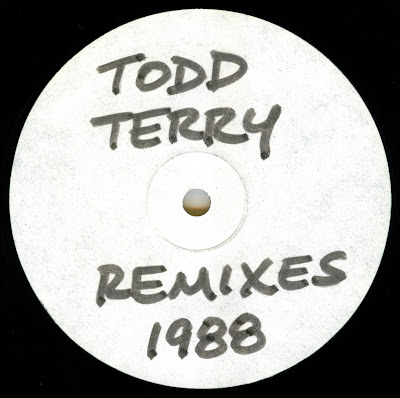 Bought this off the ebay machine. Not sure what the origin of it is. The seller was guessing these may be radio tapes pressed on wax and labeled the disc himself after some research. There are 4 tracks but only 2 were rugged enough for Ripped Open. Public Enemy's "Bring The Noise" sounds like the skeleton of an unfinished megamix while BDP's "My Philosophy gets the Latin Rascals splice style edit. 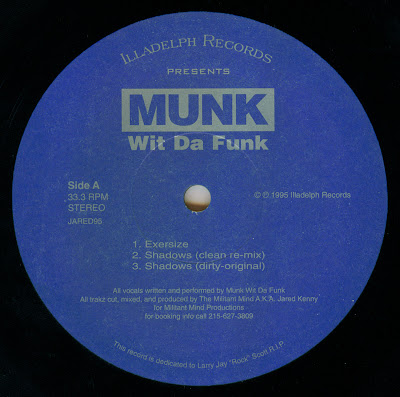 A seldom mentioned, dirty and distorted indie outta Philly circa 1995.

I was hit by a car riding my bike to work and fractured the radial head of my elbow. Basically I have a lot of time on my hand(s), but typing is pretty frustrating. I'm gonna try and put up as much music as I can while I'm off work, but text will be minimal.
Posted by Eons One at 11:16 AM 1 comment: