DON’T TRY TO MOCK THIS, ‘CAUSE YOU CAN NEVER STOP THIS 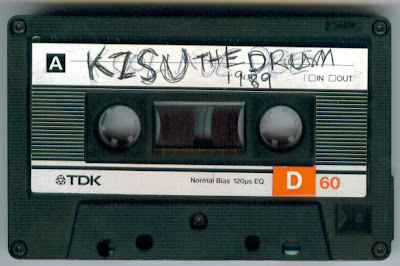 The b-side to this TDK (titled: Kool Moe Dee: How Ya Like Me Now?) has me rapping karaoke style over Eazy E records. Don’t know why I recorded that (bet it had to do with Olde 8 tho), don’t know why I never recorded over it. Pretty fucking embarrassing. I was stealing lunch money out of backpacks in the quad during second period around this time and getting caught turning in my older sister’s Psychology midterm that she had turned in only two years prior to the exact same teacher (whose husband my dad had laid off from SRI that same year). But all that’s lame. This is the shit: The Drum (with Kutmasta Kurt and Kevvy Kev) 90.1 KZSU Stanford University circa 1989.
Playlist:
Soulman
D.O.C.- Portrait of a Masterpiece
Prince EZE and Big Fran to the Third- Time to Get Funky
YZ- Thinking of a Master Plan
Bob and the Mob feat. DJ Slayer and M.C. Speedo- It's a Shame
Down with the Program
>>>>
Posted by Smooth Triumph at 9:00 PM No comments: 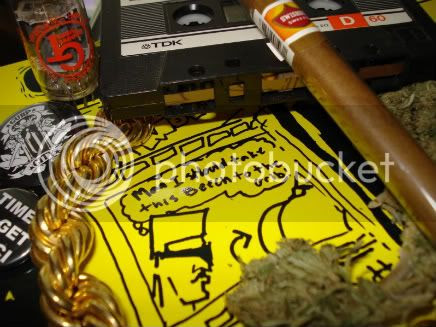 Debut of the new Ripped Open podcast. Recorded live in the Invincible Lab - runnin' rickety offa some scratchy records, shitty cables and a Ball jar of sativa. Broadcasting on 66.6FM, it's KOLD Radio. Since our limited broadcasting range only reaches a few feet outside of the Buddha Chamber, we present y'all with an archive of the inaugural show in mp3 format. Tune in next week to win a Royal Fam slipmat! 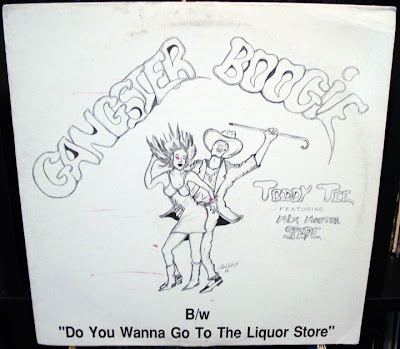 This record came out on Dunk Yer Funk (a label that has recently peaked the fuck out of our interest here at ROBME as of late) in nineteen eighty crack (1988). Apparently, Dunk Yer Funk (with the sick ass donut being dipped in a cup of coffee logo) was manufactured and distributed by a company out of San Pedro, CA called JDC, a dance label that distributed, among other dance shit from 1976-1990, a 12" by Cerrone called "Trippin on the Moon." Two other logos adorn the back cover: Hub City Records and 9MM Took Over, both with simple but ill graphics, but I think all that is a part of the JDC sub-label for rap, Dunk Yer Funk.
Engineered by longtime Dr. Dre cohort Donovan Smith, Drums programmed by Dre himself, mixed by DJ Pooh, scratched by Joe Cooley, and crooned by the precursor to Nate Dogg: the one and only Mixmaster Spade.

The briggety breakdown of Toddy Tee and Mixmaster Spade's ode to Olde English 800--"Do You Wanna Go To The Liquor Store (And Get An Eightball)":
Helium-ish "I've smoked too much crack" vocal effect-- Check.

Roland 808 or 909 (which one is it? who gives a fuck? hell, I don't even know if it's a Roland, an early model drum machine with a righteous cowbell sound anyway)-- Check.

Three or four records from your uncle's funk collection-- Check.

Which three or four?

1. Ronnie Hudson and the Street People's "West Coast Poplock" (12" single/Birdie/1982)-- used for the vocal cut: "City Of Compton" which would go on to grace various Dr. Dre productions most famously when Dre and Roger Troutman got together and re-made Ronnie Hudson's song into Tupac's "California Love." It's worth noting that Roger didn't bite shit, Eons pointed out to me that him and his brother were apparently two of the Street People and probably wrote the whole original tune for Ronnie Hudson or some shit. 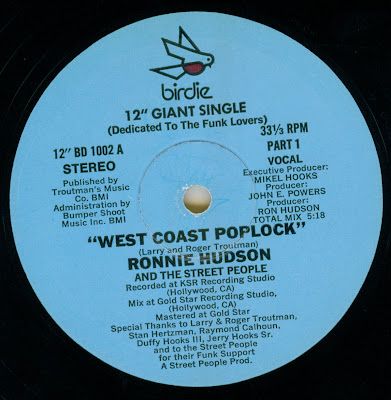 2. Funkadelic's "Knot Just (Knee Deep)-- Prince Paul could've learned a thing or two about using a sample sparingly from the conservative method that DJ Joe Cooley (or is it Dance-O-Lot Kid???) applies here, just the hits, kid! Or could Joe not get it to mix with the drum machine so he just stabs out the last part of it to finish out the bar instead? However it went down, it works like a charm.

3. Brick's "We Don't Wanna Sit Down" (self-titled album/Bang/1977)-- used for the vocal: "Do you wanna sit down? Or do you wanna get down?" I like the way the drums on this loop clash/coincide with the programmed drum machine, to me that's like a signature sound of LA swap meet hip hop.

4. Who the fuck knows???-- what record's that funky wah-like guitar loop they bring in after the Brick one goes off and then plays till the jam fades out? I just don't know, son. To be fair, there were probably also three other auxilary records in the studio that day for scratching a vocal snippet, a stab for the bridge, and the comic book record sounding "Oh Lord! What's that!"

Downest white cat mentioned in the back liner notes: Funken-Klein

Right above the Dunk Yer Funk logo, it says: "Also available on CASSETTE at the Hub City Base in Long Beach 591-2349"

I wonder what else one could pick up at the HUB city BASE? Hubs and base I assume. I also love the phone number with no area code, back when all LA county was 213. Call that number right now and ask for a copy of "Under Fire" (The Toddy Tee album this 12" promised was forthcoming) and a "double up of ready rocks" and see what the person who answers has to say. You never know you might just get hooked up.

The other two tracks on this 12" were "Gangster Boogie," where Toddy Tee encourages dancing in front of the police station and "This Beat Be Smooth." Also enjoy Eons rip of Ronnie Hudson's classic.

Didn't King Tee use "Do You Wanna Go..." for a St. Ides commercial or as a skit on the Triflin album (was that the orange and white striped one?) or someshit?

EDDIE DEF: KING OF THE MEGAMIX 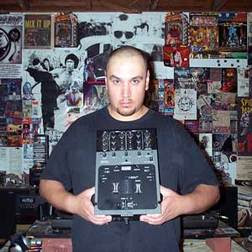 Years upon years before the term "mash up" was half heartedly jizzed out by some lame ass pop culture parasite, DJ Eddie Def was tucked away in his Mission District home studio delicately layering 50's doo wop over Hashim's relentless 808's. He had a vision. Double Dee & Steinski gave us the outline, but Eddie hit that shit every which way. Just peep this latest installment of his mandatory podcast, K.I.T.T.Y. Radio #2: