MURDER IS A MISDEMEANOR 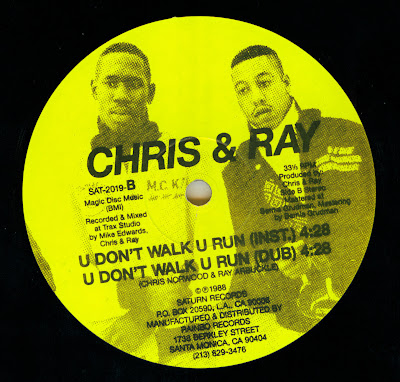 "I heard a fool call in the radio today, he said, 'San Jo is shockin'.' You need to get your sister's Rabbit so we can mob to that Rodney O. and Joe Cooley show at Studio 47. Sal's cousin's got some six-by-nines we can put in it." --Frosty C, 1987, Gunn High School, Palo Alto, Calif. And yes, he really did say "shockin'."

First of all, Saturn Records is the shit. This surly L.A. label put out only 22 records from 1983-1988. Chris and Ray's was the second to last one in '88. And although the label's mailing address was Los Angeles, they were def knee-deep in more than a few Nor Cal scenes. From billing The Triple Threat Three as the "Sound Of Sacramento" on their 1984 release "M.P.G. Rap" to shouting out Milpitas, California's Nissan Gang on the circle-label of Ceiliia's (from Manchester, England???) county-fair-hair anthem "Nissan Truckin'" a year later, Saturn made music for mini-truck culture, it's obvious. Their acts played car shows in San Jose back when it was "shockin'", no doubt. When this record came out I was in a rap group called C.O.L.D. (Chemists Of Lyrical Devastation) inspired by Saturn's 1983 release, Ice T's "Cold Wind Madness." My boy Frosty C put me up on it, sayin' "Yo, these fools are from Milpitas, dog. They in a crew that only wears Warriors Starters." I believed that immediately (even though other people said they were from L.A.). Just like an 808, a Run-DMC record, and John William's orchestra in the nimble hands of DJ Ray lend instant credibility to Chris's boasts: "Your response when I rock is, 'My god, he's froze!" In fact, I want to close out by typing out the lyrics of his third verse, because cold-murdering the track used to require an extremely high level of science and sometimes it is necessary to put a microscope on that bitch so you motherfuckers can examine exactly what I mean by that. Errrrrr Rah!

"For years I've kept, while Bo Peep wept,
my girl straight groovin' while Snow White slept
now with a quarter and a duece, I now let loose
helpin' Rocky pull the rabbit without the Moose
got my homeboys wiggin', the girlies' drawers diggin' (or "girlies drugged, diggin' me" both are def)
me in a party, rock, 'cause the dance-floor's giggin'
Number one, I'm gonna be 'im, a photo mausoleum
My DJ by my side in the Oakland Collesium
See, in Cali they scatter, gettin' madder and madder
with my DJ named Ray choppin' platter after platter
Justa tearin' up halls, rippin' down walls
girls fightin' over me in bathroom stalls
they want the fame the glory the west-side story
not told until now 'cause I felt it mandatory
and to all you wack rappers, and to those who diss
if you never bought a record then boy you'll buy this
oh yeah, I'm packin' for fun, my mic and my gun
so when you hear me rock a party you don' t walk, you run!"Chris & Ray - U Walk Don't RunChris & Ray - U Walk Don't Run (dub)Chris & Ray - U Walk Don't Run (inst)
Posted by Smooth Triumph at 4:05 PM 4 comments:

PISSING OFF THE NEIGHBORS WITH HOME BOYS DUB 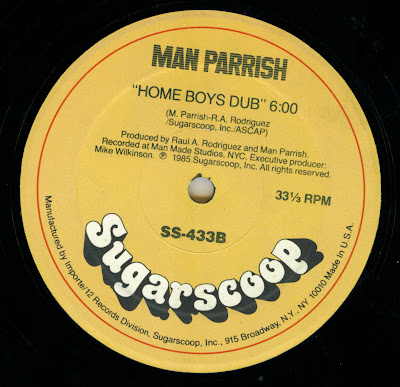 I live basically on Stanford University campus in Palo Alto, California. I am not a student. I've lived in the area practically my whole life. Senior year in high school I worked for the mom and pop grocery store on the corner delivering the butcher's ground beef to local burger joints. My neighbors are grad students with shitty cars and expensive tuitions and without a care in the world but their studies. This is a song I like to crank at four a.m. and play ten times over, just to shake up the monotony of their lives for an hour. It totally fucking works, especially when by about the third play you start drunkenly chanting along to the robot voice acapella that occurs about a third of the way through.
This was the b-side to the "Hey There Homeboys" 12" put out by New York's Sugarscoop label in 1985. In fact, this is the last record Sugarscoop ever put out. So it has that stigma of being the label-killer which in turn manifests itself into a contemplation of suicide when heard by Stanford grad students.
The Dutch disco label Rams Horn also had a 12" release with the exact same tracklisting that same year. Man Parrish double-dipped so to speak. Enjoy making some else's life a little less bearable and a little more Bronx.

FOUGHT THE COLD AND GENERATED THE WARMF! 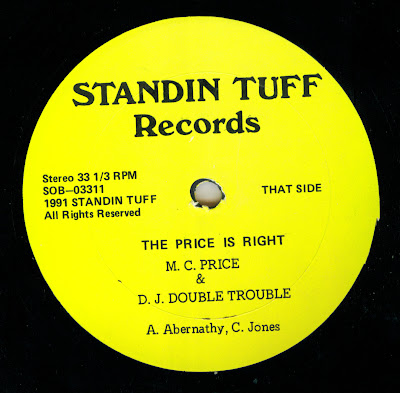 Yo, Smooth Triumph up in the bitch, crawling out the depths of a poor ass summer with obscure vinyl nuglettes for the menthol kiddies. I found MC Price and DJ Double Trouble two years ago in the garage of this run down house in Palo Alto that my blackmarket half-ass carpenter friend was remodeling without a contractor's license. It had to get took along with some scratched up as fuck LeJuan Love 12"s. I've never heard of Standin Tuff Records and it wasn't listed in Eons' Freddy Fresh book, but he only has the first edition that doesn't really go past 1990, and this record came out in 1991. MC Price raps that he's from New York, and he's totally got that Rakim-esque flow. On "The Price is Right" he raps the word "earth" exactly how Rakim would, more than once. And on "Story of My Life" he says that school wasn't fun because he had to bring his gun in a sack. All really good shit. I love records like this, where you just can't help getting the feeling like this is the only one they ever made. If I'm wrong someone please correct me. What ever happened to MC Price and DJ Double Trouble?


MC Price & DJ Double Trouble - Story of My Life
Posted by Smooth Triumph at 8:08 AM 4 comments: 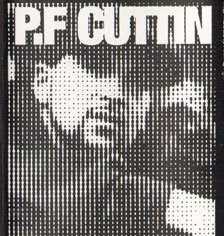 Another sure shot from the days when tapes were Kingz. This time from PF Cuttin', best known as the producer/DJ behind Blahzay Blahzay (along with MC Outloud). Their LP is a nice slice of 90's boom bap laced with heady jazz loops and contains their classic "Danger". Here we find PF solo, rocking the 1's and 2's instead of the sampler. It's 1997, you're cutting the current underground staples, there's really no explanation necessary. Some highlights: Sauce Money's "Action", that "Crew Love" track by Tone Hooker (did he ever do another record?), O.C. and Jay-Z (that was a tough record to find), Hurricane G gets a lot of burn, and that Mobb Deep track with DJ Muggs still raise my neckhairs. PF's style always stood out because dude knew how to rock the motherfucking transformer switch and continued to rock it at a time when most DJ's had migrated away from it. My homie Cullen Stalin passed this dub off to me in summer of '97 which is why I don't have a cover scan for it.

Email ThisBlogThis!Share to TwitterShare to FacebookShare to Pinterest
Labels: mixtapes 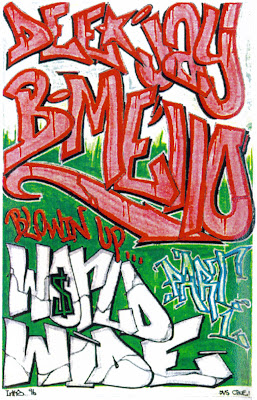 In contrast to the Rip One tape is this 1996 tape from Seattle’s DJ B-Mello. “Blowin’ Up Worldwide Part 1” is more of a live DJ mix style joint. B-Mello drops a lot of the underground staples of the time but does manage to sneak in a few seldom heard, small press treats from Perverted Rhyme Throwa, Constant Deviants, and Rascalz (plus a later Chill Rob G track) . I was surprised how good this tape sounds after years of sliding around under the seat in my truck. They don’t make ‘em like they used to.

As of this writing there have been almost 700 downloads of the Rip One tape I posted last time and only one comment. WTF? If you are enjoying the shit we are sharing or you are reposting the links elsewhere, at least leave a comment. If you have Part 2 leave a comment. We do this for the love, but there is a good amount of work involved. Props are appreciated. 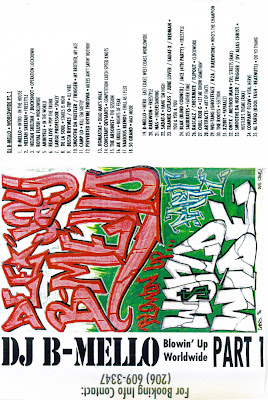