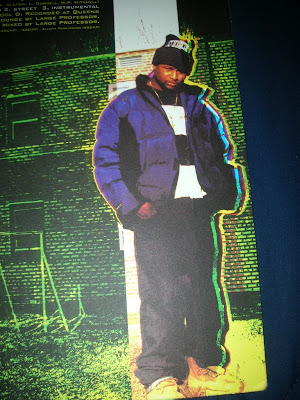 1995- Most heads first become aware of Queens' rapper B-1 on Kool G Rap's "Take 'Em To War," also featuring MF Grimm and produced by T-Ray for G Rap's "4,5,6" album. "Shit ain't never gonna change, fuck it!" B-1 and Grimm also appear on the song "Money On My Brain" from the same album, produced by Dr. Butcher.
1996- MF Grimm drops his Dr. Butcher produced debut 12", "Get Down" on Dolo Records. The b-side, "Emotions" features raps by a QU soldier from Farmers Blvd. named B-1.
1997- Rawkus gives one of the streetest of street MCs his provebial break by releasing ONE a.k.a. B-1's debut 12", "Verbal Affairs" b/w "Empire Staters." The big orange sticker on the all black center-hole sleeve boasts a Large Professor (as Extra P) guest appearance that thirteen years later I've finally realized amounts to simply "Eh yo, One! We got 'em right where we want 'em, baby! Yo! It's official" right before the last chorus that itself gets cut off, abruptly interrupted, an audio fuck it. Track was produced by Yusef Lewis for Large Productions. I would love to hear more from this guy for sure, but I think this is one of only two beats he's ever released to the public. Respect the triumphant non-prolific. The J.D. Salinger award. B-1 lets us know he's the "rap Arafat with coke inside a travel bag." The b-side, "Empire Staters," produced by grimemaster Chuckie Madness, also found its way on to the Soundbombing comp released later that same year on Rawkus as well.
1998- ONE goes back to being B-1, and Rawkus releases the sophmore 12": "Cardinal Sins featuring Kool G Rap & B.O.M.B." [even though the cover only lists G Rap... note: that might be the cutty-est underground rapper move ever: the liner notes only rapper! talk about bottom billin'! Some mixtapes list this track as "Against the Grain"] b/w "The Life We Lead" produced by Chuckie Madness (murderous bird chirps!) and DJ Kool G, respectively; and recorded and mixed by that ill engineer Large Professor in the Queens Lounge. B.O.M.B's Shan accents and influence hammers home that these artists rise from one of the strongest legacies of rhyme technique on the planet (and can anybody find another recorded rhyme by B.O.M.B.? That's a challenge). And to even further thicken the obscurity: As far as I know, DJ Kool G produced the b-side, "The Life We Lead," track to this 12", "Ms. Fat Booty" for Mos Def in 1999, another 12" for B-1 that same year, and then disappeared. Somebody tell me, is that really Kool G Rap?
1999- UK label Stonegroove Recordings releases the hard to find B-1 and Large Professor single, "Put Yo' Self In My Place" b/w "Hustle" both produced by DJ Kool G. (or is this Red Alert's son?).
2000- FatBeats releases, "How We Live" b/w "Built Like That" produced by the elusive Yusef Lewis and Chuckie Madness, respectively.
I can't really speak on the first Grimm or these last two 12"s, because I don't own them... yet. Best believe I got my lazy eye out, though! Didn't ANY real 90s hip-hop heads that didn't fall off become millionaires?? Not even just one? Why can't someone find it in them to financially back the reunion of B-1, Yusef Lewis, Chuckie Madness, DJ Kool G, with Large Professor on the boards to finally create the album that all these 12"s wholeheartedly anticipated but never came to fruition. I really wish I could hear that... and throw in some demos by B.O.M.B., thanks spanks!
VERBAL AFFAIRS
EMPIRE STATERS
CARDINAL SINS
THE LIFE WE LEAD
Posted by Smooth Triumph at 5:49 PM 6 comments:

Here’s two mixes I made when preparing for RPM at Mardi Gras (the monthly EONS ONE has held down in Redwood City since the start of this year). I can’t mix records, but he invited me play my records at his b-day party in Feb. and at the Black Stamp vs. Spareorgan show in June and this is what I pulled out. You’ll notice that BOOZEKILLER is quite a bit shorter and ends in a very predictable, almost to the verge of mind-crippling disappointment, fashion, much like many a recent night of drinking for this old bingemeister. The difference is I was already drunk when I started BOOZEKILLER, and I kicked off GRIMEBUILDER by sparking an L of Casey Jones grinded with Candy Purple, so it turned into the type of songs that I like to flip a razorblade from beneath my tongue, catch it between my teeth and smile at high school girls on Caltrain to and then it gets surprisingly nostalgic, then slightly rare, then commonly nostalgic, and then… Wayne Wonder starts singing… and yer like, “Prop 215 is turnin’ Californians fucking retarded, yo…” What can I say? “My mind be seein’ crazy visions and goin’ on mad journeys when I’m keefy, ock.” Personally, if I was piffy and came across it, I’d download it for the Mr. Supreme beats alone, if I didn’t already have the record.

Godfather Don – Properties of the Steel [Cut up by DJ Premier]

Gravediggaz – The Reincarnation of Freud

Nat The Cat – While You’ve Been Waiting

Bad Brains – I Luv I Jah

Alkaholiks - Only When I’m Drunk

Posted by Smooth Triumph at 8:01 PM No comments: