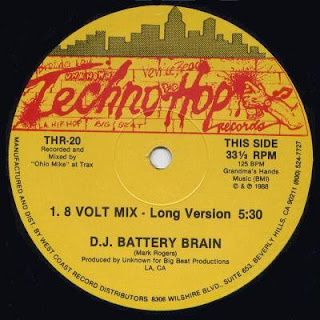 Here’s a non-progressive, retroactive, radio-style mix from our friends over at Megakut. What’s impressive is that it captures the vintage sound quality that was signature for the time period. When people, not directly involved in the scene that created it, first experienced this “electro-megamix-style-rap” music back in the late-80’s it was usually via some radio station that you could barely tune in or off a seventh-generation cassette of the same radio show. This is getting closer and closer to how it was. You just turned it up loud and listened to the bass! Sound like a weak excuse for having fucked up records? You may be right, Fletch. If you were born after ’79, it probably can’t help but sound fucked up. Not my problem, you need to obey the Mistress of Boom and just "Let It Go".

Here’s some rap and break record nerd-ery that didn’t amount to much but was nevertheless entertaining and pays tribute to the cut-up some how I'm sure, rearranging audio recordings in an effort to decode the material's implicit content, hypothesizing that such a technique could be used to discover the true meaning of a given composition. William S. Burroughs also suggested cut-ups may be effective as a form of divination saying, "When you cut into the present the future leaks out."

It all started when I was listening to “Lickshot” produced by the SD50s on the b-side of Grand Puba’s “Ya Know How It Goes” 12” from 1993. I misinterpreted the main loop as a chop of Booker T and the MGs “No Matter What Shape” off their 1966 Stax album “And Now!” When I got out my Booker T record and rocked it, I realized that “Lickshot” must’ve have been made with a different record because it sounded only slightly like “No Matter What Shape.”

Then I remembered that Grandmixer Muggs had used “No Matter What Shape” for his Main Mix on House of Pain’s “Shamrocks and Shenanigans” remix 12” with that Butch Vig monstrosity on it. Upon listening to the HOP plate, I was reminded that Muggs had been lazy and simply snatched the first bar of the groove after the vamped intro and then let it loop (the most obvious use of the break—the Main Mix and the Booker T song are the exact same bpm an’ e’rythang). Muggs definitely didn’t chop it and speed it up like I thought the SD50s had done for “Lickshot” even though as it turns out I'm pretty sure*** they didn’t do anything of the sort, though my stoned curiosity remained undaunted. So I decided to use GarageBand and my below rudimentary knowledge of breakbeat editing to chop the Booker T break to resemble what I wrongly thought the SD50s did on “Lickshot.” I stole Muggs' drum loop from a breakdown in his Main Mix to expedite the process, and what resulted sounded nothing like “Lickshot,” but perhaps you can tell how I tried to rearrange Muggs' straight forward Booker T loop in an attempt to make it sound stimulated dummie-esque by jankily incorporating the snare in the intro just before the one of the groove drops instead of letting the guitar stab double up in the second half of the measure. No great feat, I know, just a noteworthy subtle nuance. A waste of time? Perhaps. Muggs’ production is vastly superior to mine, and I never should’ve thought him lazy (his loop is flawless and those horns that come in on the chorus make it deluxe). Yes, perhaps it does sound like a waste of time to some, but I’m addicted and for me it beat the shit out of updating my Disgracebook status so my cyber “friends” could be informed as to the consistency of my last bowel movement or some other banal tid-bit concerning my worthless existence. Listen in order and literally time travel at the speed of implicit thought… decoded.

Booker T and the MG’s “No Matter What Shape”

Here Comes the Break (No Matter What Sham-Lick Death Edit)

***= if I'm wrong and the SDs did use parts of "No Matter What Shape" for "Lickshot," please correct me... but maybe you should just whisper it to me, 'cause it's not listed as a cleared sample in the liner notes and we don't want to snitch on anyone and get them busted now do we? Shit, now I gotta go back and make sure I didn't just snitch on Muggs... in the modern world where music is essentially free these sampling laws seem stupider and stupider don't you think?... praise the edit, cut shit up and reuse it, to hell with the man and his law, it's the only way we'll get to the future.

Posted by Smooth Triumph at 8:00 AM 5 comments: