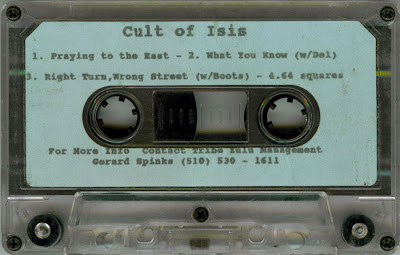 The first time I saw Troop 187 perform was at San Mateo City College at a rap contest that I had gone to because my Paly Alto rap mentor Def Emcee X (aka MD) had entered with the group he had at the time with his brother Style called Mad Africans. I forget who won that contest, but I vividly remember Troop 187. It was two dudes: one heavyset cat wearing a t-shirt and sweats that it looked like he’d slept in with a non-chalant style and a “could give a fuck” expression on his face, and another real serious, authoritative cat in a three-piece suit like an FOI calling himself the “The Bishop of Hip Hop.” They opened their set rocking a hard beat and ripping an American flag to shreds and lighting the pieces of it on fire. Being the young forty drainin’ anarchist I was, I loved that shit. I think the song was called “Torn on the 4th of July.”

Later, I met the Bishop (then known as Jason Parker) through a mutual friend of ours, music producer Jason Slater. Parker was always a real straight forward cat, extremely disciplined in his efforts with massive amounts of science to drop, but on the one-to-one he never seemed too heavy-handed about his devotions, he was just a regular cat doin’ his thing, always down to offer the knowledge he’d acquired from his firsthand experiences in the music industry and hip hop world with a delusional up-and-comer like myself. Jason Parker eventually changed his name to Adisa Banjoko ( I hope I’m spelling that right) when he was enlightened by Islam and went on to write for The Source, The Bomb, 4080, Rappages and many other well known hip-hop publications of the day under that name and also as the Bishop. I think he’s also written a few books of his own since then.

Sometime even later (this all occurred between like ’91-‘95ish ??? but I can’t remember exactly because I, like I said earlier, was a forty drainin’ anarchist): The t-shirt and sweats cat (sorry I don’t know his name, no disrespect, kid was nice with his) dropped out of the frame and Troop 187 was reborn as Cult of Isis (even thou they shout out “Troop 1-8-6 plus one” more than once on this tape) with my homie Jason Slater at the production helm. DJ Robski, a world reknowned forty drainer himself, joined the fold, and the Cult was known for performing with a militant mob of capuetta fighters in ninja-black going off around them. Back when shit was sick.

This Cult of Isis demo was recorded at Slater’s home studio in Cupertino down the block from Bateh Bros. liquor store at the intersection of Foothill and Stevens Creek, also the birthplace of pop pan-flashers Third Eye Blind who Slater was playing bass and writing songs for at the time as well (him getting screwed out of the publishing credit and money when that project went major label is a whole ‘notha story, but fuck it). The Bishop called in his underground hip hop favors and got Del and Boots from the Coup to guest star on a track each. Del actually came thru with shrooms and his own Sega Genesis and crashed at the crib for like two days while he tripped, wrote and recorded his verse. Slater said he never saw him write anything though or do any “rap work” over the entire 48 hour period. “He just ate shrooms and played Sega non-stop, and sometime on like the third day of him being there I finally said, ‘so you got something we can record?’” Del apparently said yeah walked into the bathroom/vocal booth and ripped his verses and then asked for a ride back to the East Bay. I think DJ Robski gave him that ride and did a little hip hop hustling of his own, because after that meeting, Robski became Del’s go-to live DJ and recording DJ for the Future Development album. I don't know why they stopped performing and recording together. Maybe 'cause Rob moved away. Who knows???

These Del and Boots verses are totally unknown to anybody who wasn’t directly handed one of these one-sided Cult of Isis tapes by Adisa himself, so consider this a first-time unearthed ROBME exclusive. Two overlooked gems by two great underground MCs in their primes, both subversive in their own ways, both totally B-A-Y—do or die.

But it’s not like the Bishop’s solo tracks are something to scoff at. They actually deserve repeated listens. Locked in the dopest time period, they come off like a veteran with skills honed in the original fire. Example: the final song of the four, actually the only track seemingly produced by Robski and not Slater (thou Slater may refute this; but Rob definitely did all the nice ass cuts&scratches on the tape), is called “64 Squares,” and in it Adisa Banjoko blends metaphors concerning his two loves besides almighty Allah: chess and old school hip hop, which happens to tie into the ‘where are they now?’ portion of this post. Because, currently Adisa is the founder and organizer of the Hip Hop Chess Federation (HHCF), which boasts a star-studded host of members and financial contributers including RZA from Wu-Tang Clan. From what I understand, HHCF puts on chess tournaments and like-events in the Bay and all over the country where famous and not so famous hiphoppers get their Bobby Fisher on to the beat. Martial Arts is included in there somewhere as well.

I wish the Bishop all the best; he was always cool as all hell to me.

But, does anybody know what happened to DJ Robski or the t-shirt and sweats cat?

Wait I just used Google and answered half that question myself.

Also, dude who does the intro at the top of the first track, is none other than underground Bay Area legend Bazooka Joe; that fool could rhyme his ass off. Where he at?

Sorry I can’t remember all the exact dates and particulars, but as usual the tape speaks for itself. Enjoy the demo.

Praying to the East

What You Know (Featuring Del)


I meant to post this awhile back but I lost the link and just rediscovered it this morning. A cat from the UK started up a Youtube channel called BoomBapArchives and dude is posting analog goodies from the foundation like Henry Chalfant's "All City" (1983), Euro hip hop documentary "Big Fun in the Big Town" which features some amazing live footage, West Coast b-boy doc "Breakin N Enterin" (1983), Dick Fontaine's "Beat This" (1984) (check out a sailin' Bambaata in full zulu gear) and "80 Blocks from Tiffany's" a 1979 doc that looks at the gangs in the South Bronx, among others.
Posted by Eons One at 8:20 AM 1 comment: 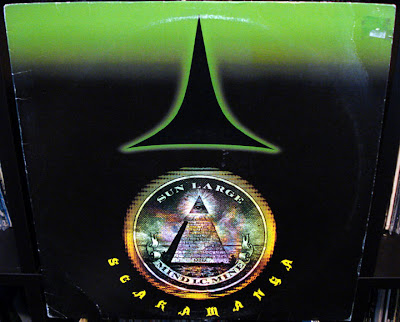 Those who know me know how much of a Godfather Don fan I am. From his incorporation of black metal imagery into his logo to his hand in reinvigorating a stagnant MC's Ultra through his MPC 60 - in my opionion, Don is one of the best producers on the mic and one of the best mc's to tap out a sequence. So imagine my surprise when I stumbled upon this Scaramanga 12" from 1999 that features two exclusive Godfather Don productions on the B side. I have had the Scaramanga LP and Special EFX 12" for awhile but somehow the "Mind I.C. Mine" 12" stayed off my radar up until a month ago. I'll assume you all have peeped the Scaramanga LP already which has a few Don productions on it, so we'll jump to the tracks exclusive to this 12". "Suga 99 (Remix)" is (obviously) a Godfather Don remix of Manga's own version from the LP. I swear this beat is on a Hydrabeats LP. Don organizes some bells and strings to levitate around some heavy drums, clearing a path for Menelik's chrome alien word association. "Group War 2000" is the real treat which features both production and a guest verse from Don. 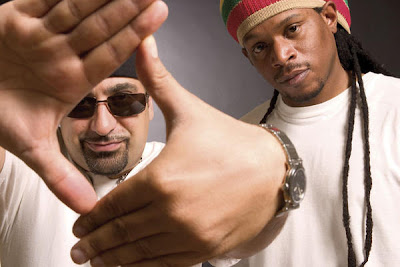 Black Stamp rolled through to drop off some prints at the crib and handed me an unlabeled tape that he said was a Wake Up Show episode from 1994. After listening to the tape I think it may even be from 93. He edited the commercials out so you get 90 minutes of hot schitt with no BS. Where is that Gangstarr track on side A from? Kevvy Kev is in the house too.

Also, I'd like to take a sec to send out an open invite for anyone to contribute old radio show tapes to ROBME. Especially stuff from the Bay Area and/or West Coast. I can rip the tape and return it to you with a high quality (better than mp3) audio CDR. Leave a comment or contact us through the Grand Invincible page if you got an old shoe box full of tapes collecting dust.